Kevin White, of Springfield, received his medical degree on June 6 as a member of the Class of 2021 at the University of Massachusetts Medical School in Worcester. White is among the first graduates of the medical school’s PURCH ( Population-based Urban and Rural Population Health ) track to complete studies at the satellite campus at Baystate Health in Springfield. He is completing his residency at the Walter Reed National Military Medical Center in Maryland. (ROBERT CARLIN / UNIVERSITY OF MASSACHUSETTS MEDICAL SCHOOL PHOTO)

By Carolyn Robbins | Special to The Republican

At the University of Massachusetts Medical School’s 48th commencement ceremony a week ago, two high achievers from Springfield – one with career-long accolades to his credit and another just beginning to forge his own career path – were front and center.

Henry M. Thomas III, president and CEO of the Urban League of Springfield and former chair of the UMass Board of Trustees, was among three honorary degree recipients recognized.

And, 26-year-old Kevin White received his medical degree as one of the school’s inaugural cohort of 19 students who did the bulk of their clinical training at the medical school’s 4-year-old satellite campus at Springfield’s Baystate Health. He was among more than 250 students from the School of Medicine, the Graduate School of Nursing and the Graduate School of Biomedical Sciences to receive degrees.

“It represents a convergence of a lot of wonderful things,” Collins said, noting Thomas’ support for the school of medicine’s satellite program known as Population-based Urban and Rural Population Health (PURCH) track, attended by White. “It’s a pure joy to honor both of them.”

White now heads to Walter Reed National Military Medical Center in Bethesda, Maryland, where he will serve in the U.S. Navy as a resident in primary medicine. It meant White received both his medical degree and his naval commission on the same day.

As a former UMass board chair, Thomas has been a champion of UMass Medical School, the state’s first and only public academic health and science center, Collins says. Thomas was also instrumental in the creation of the Baystate Health satellite program known as the PURCH track, he notes.

“There was a talk of opening a satellite for 40 years,” says Thomas. “As chairman of the board, I asked then-UMass president Robert Caret to help me.”

Caret, who previously had developed a satellite campus in downtown Baltimore for Towson University, helped make the idea of a Springfield medical school a reality.

“We could do that here. I want you to help me do it,” Thomas recalls of his conversation with Caret. “A team of strong leaders with a can-do spirit is what was needed.”

Chancellor Collins was on the same wavelength.

Collins had high praise for the Baystate medical faculty members who trained students in the PURCH program. The medical school had already had an affiliation with Baystate through Tufts Medical Center before the Springfield satellite campus was established. “The beauty for us was that it was already a teaching hospital,” Collins said. “And we had a very proficient faculty.”

Students admitted to UMass Medical School can check a box that they are interested in the PURCH track. The goal is to admit 20% of the class into the track. There were 19 in first cohort, and the goal is to increase the number to 25.

“Members of this first class are truly trailblazers,” said Dr. Andrew Artenstein, chief physician executive and chief academic officer at Baystate Health. “They were already highly accomplished in college and in life when they chose UMass Medical School over other top schools including Harvard.

“They took a chance on a new regional campus, deciding that working with underserved populations was a good fit for their goals in medicine,” he said. “And they put their trust in us.”

A special feature of the PURCH track is a partnership with non-physicians who work in community based social service agencies, including homeless shelters, daycare centers and jails, Artenstein said. 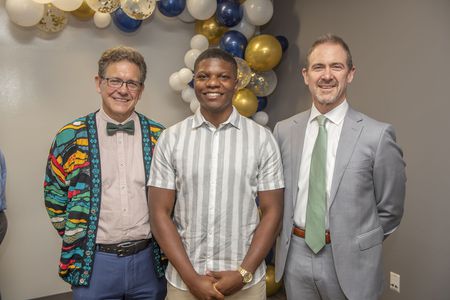 Through those experiences the students become better doctors. “It’s not all about diagnosing sickness,” he said. “It’s understanding what people go through and how they can impact their patients’ lives.”

Of this first group of graduates, added Artenstein, “They taught our faculty as much as we taught them. They are extraordinary.”

Members of the PURCH cohort are heading to top-level residency programs. Four of the new MDs will stay at Baystate Health for residency much to the delight of the faculty who worked with them.

The PURCH track is a patient-centered and team-based program aimed at narrowing health care disparities in urban and rural populations. The students and their instructors formed partnerships with organizations like Square One, the Martin Luther King Center, homeless shelters and the Hampden County Correctional Center, among others.

UMass Medical School is continuing its commitment to the PURCH program as its first graduates head off to careers in medicine, according to Collins.

Thomas, too, says he will continue to promote the PURCH program and celebrate the good work its students have done in the community.

White said he and his student colleagues and faculty, who make up part of a learning circle known as “Brightwood” for one of the neighborhoods it serves, learned a lot from community leaders when they began their studies in Springfield.

Interactions with neighborhood community leaders helped him understand that being a good doctor means listening to your patients and their feelings about health care they have received. He said, “I’ve learned so much from them.”

White, who was born at Baystate Medical Center and is a graduate of Sabis International Charter School, was among four of the students in the inaugural PURCH class to be from Springfield or nearby communities.

When Thomas, who also received an honorary degree from Nichols College this spring, joined the Urban League of Springfield in 1974, at the age of 25, he became the nation’s youngest appointed leader of a National Urban League affiliate.

A native of Springfield, Thomas founded the New Leadership Council Charter School, established Step Up Springfield, was the first African-American to chair the Springfield Police and Fire commissions and previously led Camp Atwater in North Brookfield, the oldest overnight camp for African American youth in the United States.

After his appointment to the UMass Board of Trustees by Gov. Deval Patrick in 2007, Thomas distinguished himself with a 13-year tenure, including two-and-a-half years as board chair. Thomas earned bachelor’s and master’s degrees from American International College and his law degree from Western New England University School of Law.